Mark first learnt to freedive at the age of ten in the blue waters of the Bahamas. Growing up surrounded by warm, tropical oceans and stunning marine life meant endless childhood days were spent snorkelling among coral gardens. His developing fascination ultimately led to scuba diving and as luck would have it, a youth apprenticeship working the summer season on a local dive boat. It was during those early years that Mark’s ability as a freediver began to emerge.

After relocating back to the UK in the mid-seventies, he ventured briefly into the Royal Navy before pursuing an independent career in IT. Outside of his career, his interest in SCUBA diving continued to grow and with that, a passion for underwater photography.

In 2002, Mark returned to his roots and began training intensively to compete as a freediving athlete. Over a ten year period he became the UK champion four times, in 2005, 2006, 2007 and 2009. His years on the freediving circuit saw him set a number of British freediving records and he was a UK Team Silver medalist in the AIDA World Freediving Championships, 2004.These successes led quite naturally to a number of challenges. He ran London’s longest standing freediving club between 2004 and 2012 and has instructed, coached and judged in the sport at a national and international level. 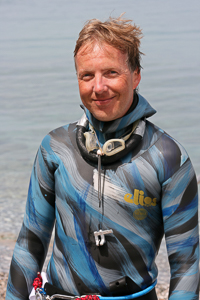 Within the television and film industry Mark's expertise has brought involvement in a host of interesting projects:

He has acted as Press Officer for the British Freediving Association and in this role he liaised with the press, public, media, sports and medical bodies on a regular basis. His expertise has been sought on a host of wide-ranging topics from David Blaine’s underwater stunt to the 2006 bombing tragedy in Dahab. He has written several related features and news articles. Mark’s first book, Glass and Water - the Essential Guide to Freediving for Underwater Photography was published in 2015.

His underwater photography initiation was with a Sea & Sea MX10, and then a mixture of Olympus equipment before becoming enthusiastic about micro four thirds. This technology appeared to have been developed with the freediver in mind – compact size appropriate for streamlining, interchangeable lenses and a reasonably sized sensor. In 2013 one of Mark’s images was selected by Brian Skerry to appear in the exhibit "Portraits of Planet Ocean" at the Smithsonian National Museum of Natural History.

He is currently a member of the British Society of Underwater Photographers. Mark is married to his dream girl, adventurer and underwater photographer Laura Storm. They live together in Surrey, UK.
Next
Previous