La Reunion Sunset
A macaron is a small circular meringue biscuit, of French origin. The Bottlenose dolphin we made friends with off the west coast of La Réunion in the Indian Ocean, in all likelihood was known by another name. Seeing as he had a healed wound on his underside, about the same size as a macaron, I’m happy enough to name him with that for now.

Myself, partner Laura Storm and three other underwater photographers hadn’t made the lengthy journey from the UK to Réunion in search of dolphins. Eighteen months previous, we had started our planning to find and photograph Humpback whales. Réunion had the reputation as an area with an abundance of Humpbacks, in the right season.

The downside to long-term plans is that a lot can change in eighteen months. And it had. The first setback happened six months before our trip, when changes to regulations involving cetacean encounters came into force. Essential measures designed to protect the animals’ welfare, the necessity of which we fully understood. But since we had already researched and storyboarded for photoshoots that we knew to be ethical, non-intrusive and on the humpbacks’ terms, the changes imposed additional considerations.

Boats could now be no closer than 100 metres from a cetacean. In the water, swimmers, freedivers and photographers had to be a minimum of 15 metres away. One boat could approach at a time with a maximum of 5 divers allowed in the water and for only 15 minutes. If there were more than three boats on the scene, then all in-water experiences were prohibited. Surface marker buoys had also become mandatory and in water, the group had to stay close to the buoy, a visual signal for boat traffic. For encounters not involving in-water activity, and to control intrusion and noise from whale-watching boats, a total of five boats were allowed within a 300m range.

The reality is that these measures have generated a free-for-all mentality. On perpetual high alert, boat crews are in contact with each other the moment a whale has been sighted. And a bright red buoy bobbing about in the ocean is a dead give-away; triggering a mad scramble to get in on the action before the competition.

As our trip drew closer we received more bad news. The Humpback season was late, and when whales did finally arrive there were only a handful. Then, just before boarding flights, we discovered we were due for high winds soon after arriving. Things weren’t looking great.

All the optimism in the world didn’t change the more probable outcome. Grounded for three out of the planned 10 days. Humpback encounters on the other seven? L’oeuf. The big egg.

We had seen dolphins on most days at sea, but had chosen not to interact with them. Simply because there would typically be a queue of other boats nearby, and waiting our turn decreased the time available to scour the ocean for larger creatures. By day six however, we accepted our fate and jumped into the deep, blue pool with the dolphins.

Our first encounter was with Spinners, who were quite focused on moving from A to B without wasting time with an audience. Seen it all before, no doubt. So that experience was short and sweet, and not particularly productive with the image capturing process.

On our last day we made an early start, and after half an hour or so, I spotted a lone fin breaking the surface now and again, some distance away. We slipped into the water and within a minute or two, Macaron made his approach. 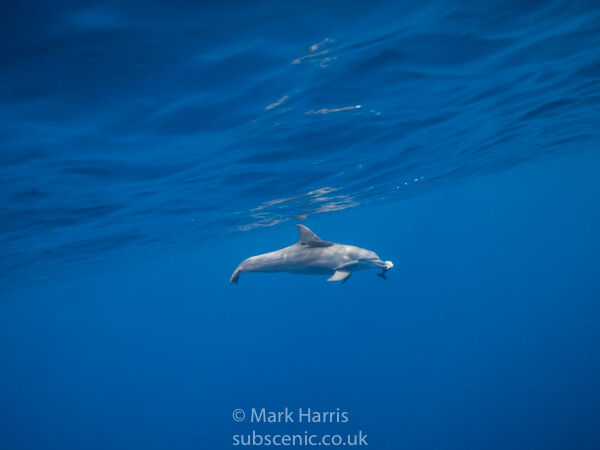 Clamped between his jaws were the remnants of a partially devoured fish. I have since discovered that Indo-Pacific bottlenose males often carry around half-eaten fish. Typically the bottom half. Possibly to show off their prowess as hunters to females and younger dolphins, although in this case Macaron was a lone entity.

He circled around a few times and then released the fish, right in front of us. In the past, I have spent time in the water with Atlantic spotted dolphin and seen similar behaviour with pieces of seaweed. This is where they play with it for a while, then release it for another dolphin (or human) to do the same. Unsure of Macaron’s intent, I picked up the fish. 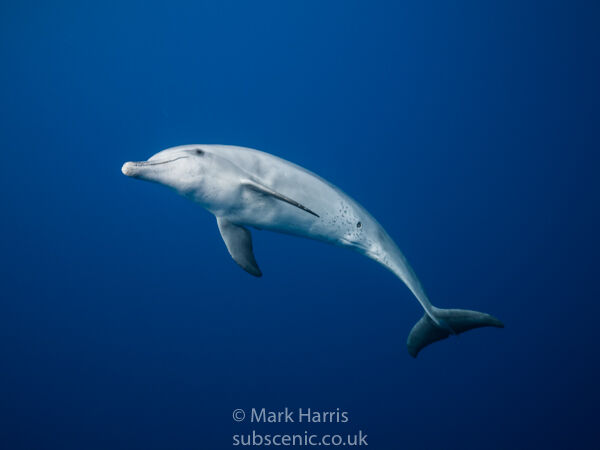 This triggered an immediate response. Clicks and whistles came forth, and encouraging head and tail movements (from Macaron, not me). I sensed he was happy, but in hindsight it could have been a sign of frustration. I tried handing the fish back, but he wasn’t having any of it. Then I remembered how dolphins give and receive - by letting go. So I did just that. 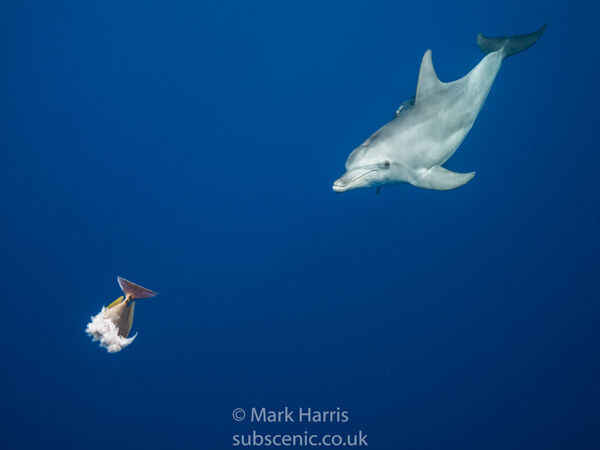 The next event I feel sure was a lesson. Macaron picked up the fish and started to gulp it down, tail last. Up until a point. He then regurgitated his half-eaten trophy and brought it back to me. Again he let go. 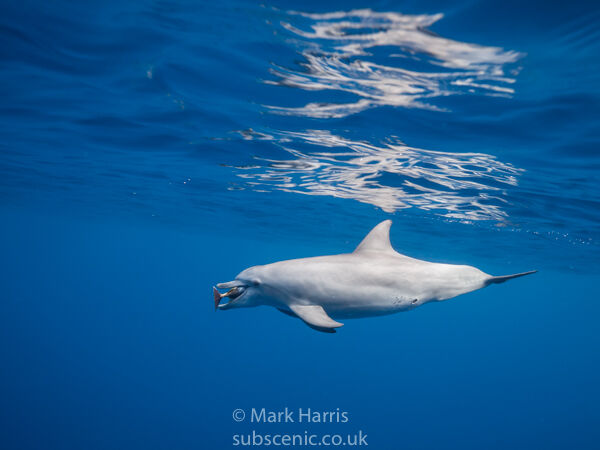 The significance of his actions didn’t immediately dawn on me, but I picked up the fish for a second time. Macaron must have felt his work was complete. Job done, good deed for the day. A flick or two of the tail and he disappeared into the depths. I really hope he didn’t see that I let go of his fishy gift, and let it sink to the seabed. I’d already had a croissant for breakfast. 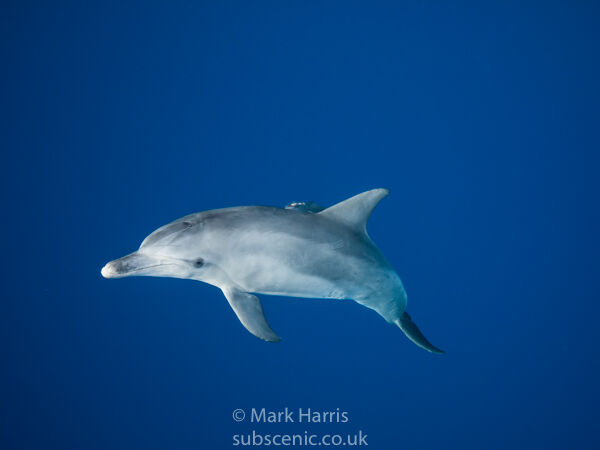 There can be different interpretations of what happened that morning, and although mine is of a magnanimous dolphin donating his treasured catch, perhaps it was nature’s way of sending a message. For years now our species have thrown fish at dolphins to get them to perform tricks for human entertainment, cruelly imprisoned in concrete enclosures. Let’s stop doing that.

Douglas Adams put forward an interesting theory on dolphin intelligence in The Hitchhiker’s Guide To The Galaxy. He wrote, “On the planet Earth, man had always assumed that he was more intelligent than dolphins because he had achieved so much — the wheel, New York, wars and so on — whilst all the dolphins had ever done was muck about in the water having a good time. But conversely, the dolphins had always believed that they were far more intelligent than man — for precisely the same reasons.”.

Was this then what it was all about?

This article was first published in the Nov/Dec 2019 issue of Underwater Photography Magazine.
Next
Previous